A big topic of conversation for 2021 has been the For the People Act (HR1). HR1 is an expansive bill, spanning a number of voter issues including registration, early and mail-in voting, voter roll purges, election securing, campaign finance, and outlines conflict of interest and ethics provisions for federal employees. With the bill being hotly debated by Congress, we are reminded of other contentious battles over American voting rights legislation.

For decades, people of color and other marginalized groups were denied the right to vote and met with violence and intimidation when they challenged the status quo. Civil rights organizers worked at various levels to challenge the discriminatory laws and segregationist attitudes prevalent across America. During the height of the Civil Rights movement the increased brutality inspired greater activism, which in turn led to the passage of the Voting Rights Act of 1965. The landmark legislation sought to combat voting laws that discriminated against voters on the basis of race.

END_OF_DOCUMENT_TOKEN_TO_BE_REPLACED

Interested in French history and language? Explore digitized items from our French Pamphlet collection online!  The entire collection spans from 1620 to 1966 and contains pamphlets on a variety of topics, covering everything from religion to science to the economy.

The most significant portion of the collection is on politics and social issues in France, particularly the French Revolution.  The collection includes the Déclaration des Droits de l’Homme et du Citoyen, one of the most important civil rights documents of the French Revolution.  The Déclaration espoused the principle of popular sovereignty and that all citizens were equal in the eyes of the law.   The collection also includes pamphlets opposing  the revolution, such as Le de Profundis de la Noblesse et du Clergé.

END_OF_DOCUMENT_TOKEN_TO_BE_REPLACED

“In the United States today, we have more than our share of the nattering nabobs of negativism.”

Rhetoric like this, found scattered throughout the hundreds of speeches performed by Vice President Spiro T. Agnew illustrates the quotable, and sometimes comedic, aspects of the nation’s most vocal Vice President. As a man of controversy and alliteration, Vice President Agnew’s voice called out to the theoretical “Silent Majority” from 1968 to 1973 to speak up about their opinions opposing “corrupted” national news media and supporting President Richard Nixon’s withdrawal from the Vietnam War among other social and political topics.

Starting in 1977, Agnew began donating his personal collection of over 500 linear feet of materials to the University of Maryland Libraries. Included in those materials, were 1,368 audiotapes spanning Agnew’s time as Governor of Maryland, the 39th Vice President of the United States, and his post-resignation career. Identified as preservation concerns and potentially high- use items, the audio recordings became a digitization priority for the University Libraries. In 2017, SCUA unit ran a pilot digitization program converting 173 of the tapes to digital recordings and making them accessible to patrons visiting the Maryland Room in Hornbake Library. In 2018, curators identified an additional 559 audio recordings within the Spiro T. Agnew papers to be digitized and made accessible to researchers.

Obtaining funds and selecting recordings was only the beginning. In November and December 2018, the 559 open reels and cassette tapes were pulled from various boxes in the Spiro T. Agnew papers. This process included verifying metadata for the materials confirming the correct material was pulled. The reels and tapes were then packed in shipping boxes and prepared for shipment to the vendor. About 40 of the open reels were previously identified as mold risks and were packaged separately with new containers for their return. The digitization vendor baked the tapes to prevent further mold damage as part of their work. We received our newly created digital files and physical materials in April. The files were then checked by staff in our Digital Conversion and Media Reformatting Lab to ensure the accuracy and integrity of the files. At that time, issues with speed, pitch, and volume were identified.

From June through August, I listened to each of the 559 audio recordings to create an accurate and searchable title and a description that informed researchers of what kind of topics were addressed during that recording. Some of the recordings were short, while others were as long as 90 minutes. While this process was tedious, all our newly digitized recordings now have unique and searchable titles and descriptions that will allow researchers to discover these material and learn more about the political climate between 1969 and 1973.

Once the metadata was complete and reviewed by our metadata librarian, the files were ingested to University Libraries’ Digital Collections and the finding aid to the collection was updated. Researchers now have access to these recordings online. Recordings with copyright protection are available for education use only on campus at the University of Maryland.

Topics of these recordings range from

The recordings also demonstrate the support Agnew received from constituents, including homemade songs and voice recordings praising the Vice President for his integrity and candor.

The breadth of information that these recordings hold are not only valuable to Vice Presidential scholars and Agnew supporters, but for anyone interested in learning about the United States at the turn of the decade.

More information about the CLIR grant program, made possible by funding from The Andrew W. Mellon Foundation.

Jen Piegols graduated in May 2019 with her MLIS from the College of Information Studies at the University of Maryland. She works in the State of Maryland and Historical Collections at UMD’s Special Collections and University Archives, and is assisting with the digitization of the collections’ unique audio recordings.

Twenty years before Peggy Noonan and Mary Kate Cary – speechwriters for Presidents Ronald Reagan and George H.W. Bush, respectively – there was Cynthia Rosenwald. From 1966 to 1970, she formed a speechwriting partnership with Spiro T. Agnew, whose papers are housed within the Maryland and Historical Collections unit in Special Collections and University Archives at the University of Maryland libraries. Contained with the Agnew papers are manuscript speeches – some never delivered – which help illuminate the work of Rosenwald. She served as Agnew’s main speechwriter, throughout his years as Maryland’s Governor (1967-1968) and during the first year in which he served as Vice President (1969-1973). END_OF_DOCUMENT_TOKEN_TO_BE_REPLACED

The idea that history repeats itself is a popular concept. Whether expressed as “those who do not learn history are doomed to repeat it” or “there’s nothing new under the sun,” this concept has found countless different expressions for itself. While it may be a cliche, it is a very real part of working in an archive. The collection could be from 10, 50, or 100 years ago, and I still find myself surprised by how resonant the materials can be with the present. The cartoons of John Stampone is one such case.

Stampone, a Maryland native having lived in Baltimore, Silver Spring, and Olney, drew cartoons that explored foundational concepts of America and the American labor movement (as has been previously discussed with regards to his Thanksgiving cartoons) as well as exploring the critical issues of his day. While looking through his work, I was struck by how some of the images and critiques he makes seem more relevant than ever in 2017.

One such image is a cartoon for the AFL-CIO News celebrating Labor Day in 1978. The cartoon depicts, in the foreground, a hand engraved with the words “U.S. Labor Day.” The hand is holding a radiant gemstone with the words “Human rights” emanating from it. This hand is juxtaposed against an image of the Kremlin the background out of which a hand rises clutching a ball and chain inscribed with “oppression” on it. The stark binary between the darkened Kremlin and the brilliant gem of human rights really speaks to the growing tensions from the 2016 Presidential Election. 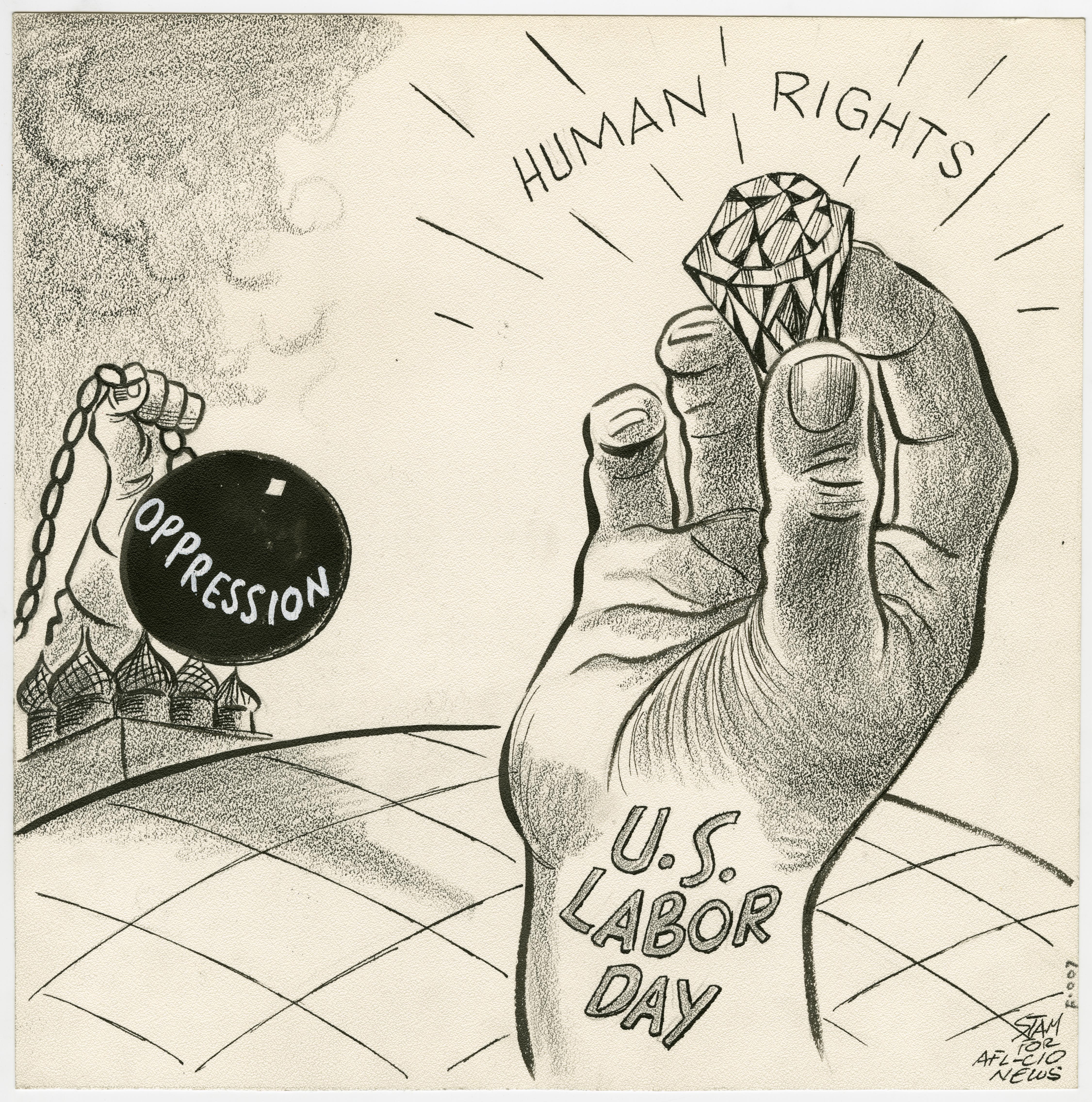 The second cartoon that stood out for me is from 1975, also from the AFL-CIO News. It depicts a man, labeled “deepening recession,” hiding around a corner with a club labeled “social, racial tensions” as a pain of men one labeled “human rights” and the other “human relations” begin to turn the corner. The cartoon argues that human rights and relations are threatened by a recession that creates conflicts between classes and races. Coming out of our most recent recession and the political events that have followed, perhaps reaching its climax with the 2016 election, this cartoon remains relevant speaking to our current economic, social, and racial conflicts, almost 50 years later.

The AFL-CIO News is fully digitized online – check it out!

Benjamin Bradley is a second year MLIS student in the College of Information Studies at the University of Maryland. He works in the Labor Collections at UMD’s Special Collections and University Archives. You can also find him over in McKeldin Library where he is the GA for Electronic Resources.

The Vice Presidential papers of Spiro T. Agnew contains a transcript of a press conference which took place in the White House on July 7, 1970. Agnew reportedly said,

“It is one of the disabilities of our culture as Americans that we don’t have more attention paid to the need of our citizens to speak the language of our contiguous neighbors. There are very few Americans, I think, that are fluent in Spanish, along with the 2,000-mile border that separates us from Mexico.”

Agnew – a lifelong member of the Republican Party – accepted that speaking Spanish (even as a primary language) was not a disqualification for citizenship in the United States and he addressed the situation of “Spanish-speaking citizens” as a set of linked social “problems.” Seeing himself as “a minority citizen” by virtue of his father’s Greek ancestry, Agnew spoke of the acceptable arousal of the “public conscience” by “members of minority groups” to “use demonstrative measures to trigger the public interest.” (1)

During an official state visit to Greece in October 1971, Vice-President Agnew dedicated a plaque in Gargalionai, the hometown of his father, who immigrated to the United States in 1897. Official White House Photograph, Spiro T. Agnew Papers, Special Collections, University of Maryland Libraries.

END_OF_DOCUMENT_TOKEN_TO_BE_REPLACED

On this #CTWwednesday, we remember Sesame Street's Bob McGrath, who passed away this week. Here he is teaching four youngsters sign language ❤️
We’re excited to share a new acquisition and beautiful #titlepagetuesday #rarebook featuring the art of English illustrator Arthur Gaskin!
L is for Lecture in the ABCs of author Katherine Anne Porter!