Over the past two months, members of the Maryland and Historical Collections unit in Hornbake Library have been creating an inventory of memorabilia from the Spiro T. Agnew papers. This assortment of objects includes political mementos and various gifts that Agnew received during his political career. These items primarily date from Agnew’s time as Vice President of the United States. There are also earlier materials that were presented to Spiro Agnew while he was governor of Maryland. The Agnew papers contain large quantities of souvenir items, like American flag pins, tie clips with Agnew’s signature, and ballpoint pens, but this collection also encompasses some truly one-of-a-kind pieces.

The stately gifts that Agnew received from foreign dignitaries coexist with the unusual trinkets sent to him by ordinary Americans. When you open one of these boxes, you might find a greeting card from the King of Morocco or a plastic yellow Easter egg from a class of New Jersey eighth graders. Often, these items from constituents were accompanied by well wishes and letters of support for the Vice President. In other cases, the senders tried to highlight their own products by sending Agnew a free sample. There are several portraits of Agnew and other pieces of art in the collection. Some of the artists faithfully captured Agnew’s likeness while others took more creative liberties.

For instance, this collection of memorabilia includes a red, white, and blue statue of a bird that was named “Sparrow Agnew.” Another individual sent the Vice President a portrait that she carved out of a piece of driftwood from Lake Michigan.  It is not always clear who sent Agnew a particular item, why they thought that Agnew would want it, nor even why Agnew decided to keep it among his papers. But those enigmas just add to the fun.

Spiro Agnew was an avid golfer and many of the gifts that he received while in office were related to the sport. He received a plethora of golf balls, tees, and towels. Other golf-themed items include a barometer (or “Golfer’s Fore-Caster”), a mink golf club cover, and a hat labeled “Agnew Golf Helmet.” There are also objects from golf tournaments that Agnew entered, such as the Bob Hope Desert Classic. 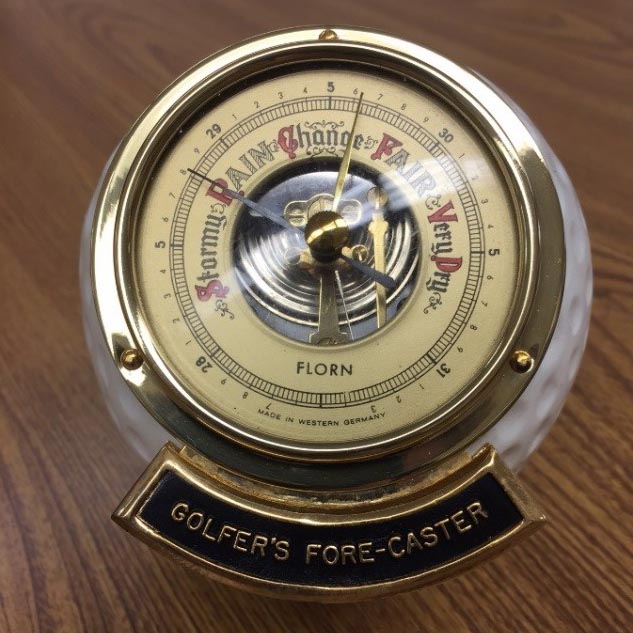 Other items appear to have been chosen for Spiro Agnew because of his Greek heritage. One New York man sent Vice President Agnew a pair of traditional Greek shoes with large, red tassels. The accompanying gift card mentions that the sender found the shoes during his vacation to Greece and hoped that they would bring Agnew good luck. The card also states that the shoes were previously worn, so hopefully Vice President Agnew was comfortable receiving secondhand goods.

🦂🥞♏️🍍 Astrology and cooking join forces in today's #cookingthecollections recipe: Apple Pancakes and Fresh Pineapple Continental!
🍾 We're kicking off December with a celebration of food and family for the holidays!
It's a grouchy #CTWwednesday when Oscar the Grouch visits the library in this photograph from the Children's Television Workshop records!