It’s the holiday season! Let’s take a look at all the ways people in Maryland have celebrated Chanukah and Christmas over the years found in historic Maryland newspapers from Chronicling America.

END_OF_DOCUMENT_TOKEN_TO_BE_REPLACED

A new exhibit is on display in the Maryland Room will get you in the holiday spirit! We’ve selected the jolliest holiday cards and ephemera from our literary and historical several collections, including the Theodore R. McKeldin Paper, Gordon W. Prange Papers, Djuna Barnes Papers, Robert Frost Book Collection, and Spiro T. Agnew Papers, and  William Addison Dwiggins Collection.

Items from our literary collection include a selection of holiday chapbooks printed by the Spiral Press with the poetry of Robert Frost.  Colorful holiday cards from author T.S. Eliot and socialite Peggy Guggenheim to writer/artist Djuna Barnes are also featured. An impressive oversized edition of A Christmas Carol on display was designed and illustrated by W.A. Dwiggins, and was bound in festive green leather and marbled paper design. 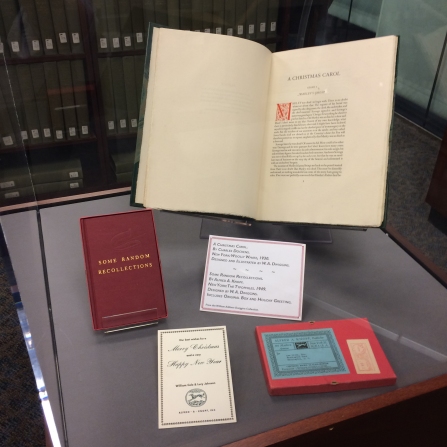 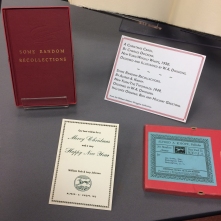 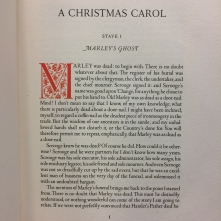 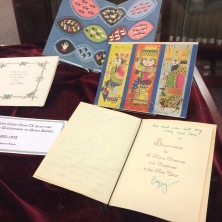 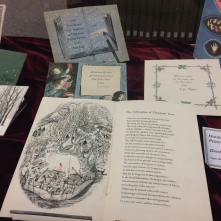 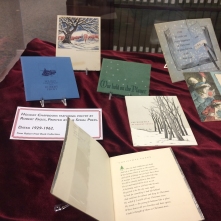 We also pulled interesting holiday-themed items from our historical collection, including a set of beautiful Japanese inspired holiday cards received by UMD professor and historian Gordon W. Prange. A variety of presidential holiday cards given to Governor of Maryland Theodore McKeldin include holiday greetings from US Presidents Nixon, Eisenhower, Johnson, as well as the President of Israel Zalman Sazar. A political cartoon with Santa from the AFL-CIO archives and speech given by Vice President Agnew at a tree lighting ceremony on Washington DC also add to the historical holiday fun. 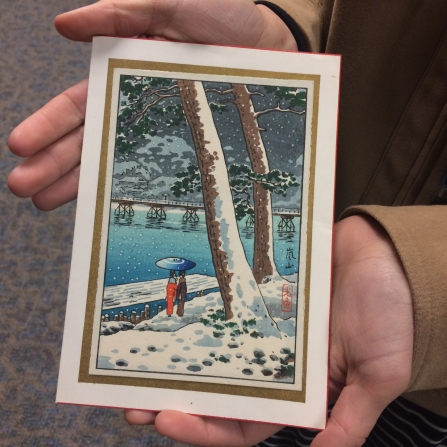 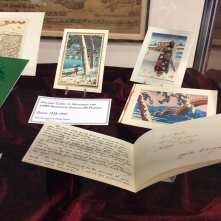 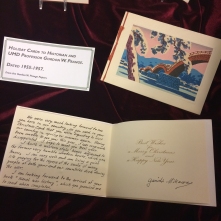 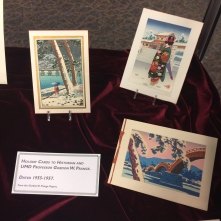 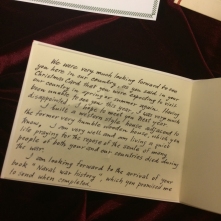 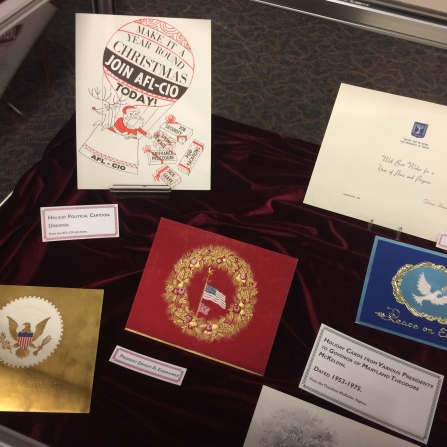 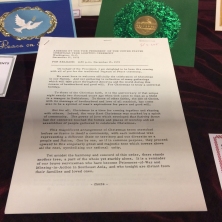 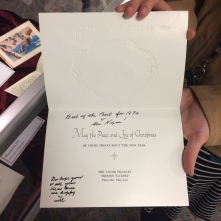 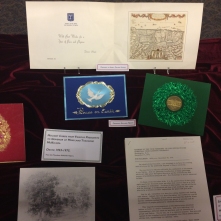 Visit the Maryland Room to explore the holiday fun! You can also pick up a free holiday card featuring images from our Baltimore News American Photograph Collection! 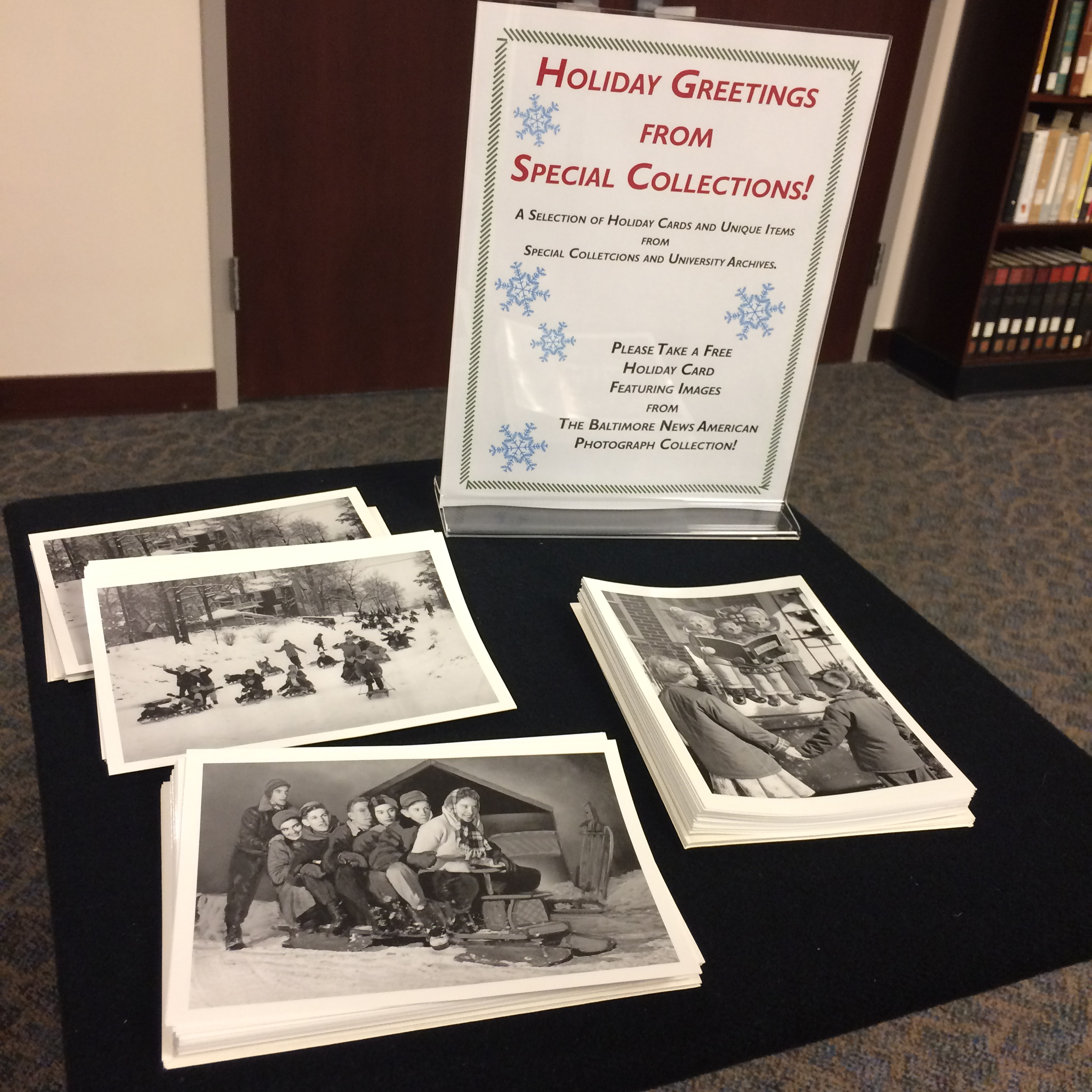 Today’s post is written by Elliott Wrenn, Student Assistant for the Historic Maryland Newspapers Project and MLS candidate in UMD’s College of Information Studies. Thanks to Jill Fosse for providing the translations in this blog post. Enjoy! 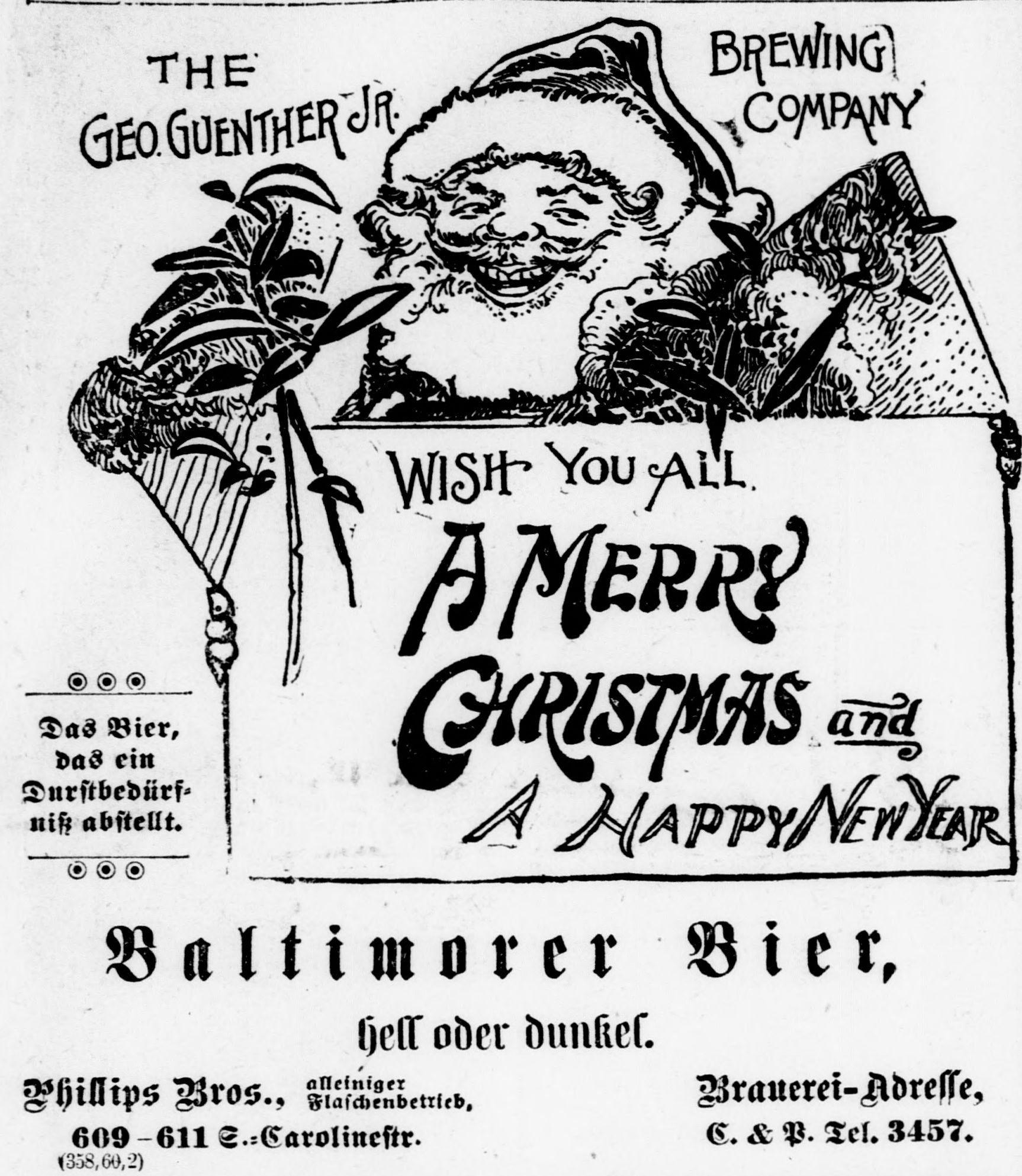 With the holidays upon us, we at the Historic Maryland Newspapers Project cannot help but post a few images of what Baltimore residents saw in Der Deutsche Correspondent during the holidays. The images primarily come from paid advertisements posted in the paper.  As ads can play a significant role in shaping and reflecting material and visual culture of the time, the news daily allows us to look at daily life as a turn-of-the-century Baltimorean saw it.

November and December issues are filled with ads for the holidays.  These include advertisements for a Thanksgiving Grokes Austern-Souper (oyster supper); week-long train getaways for Weihnachten-Neujahr [Christmas-New Year]; Christmas stocks of “fresh raisins, currants, citron,” books and games for children; and Christmas showpieces at the Ford’s Grand Opera House in Baltimore.

Santa Claus is prominent throughout December editions in the 1880s and 1890s, appearing in countless Christmas stories, poems, and ads for children’s toys and men’s clothing. 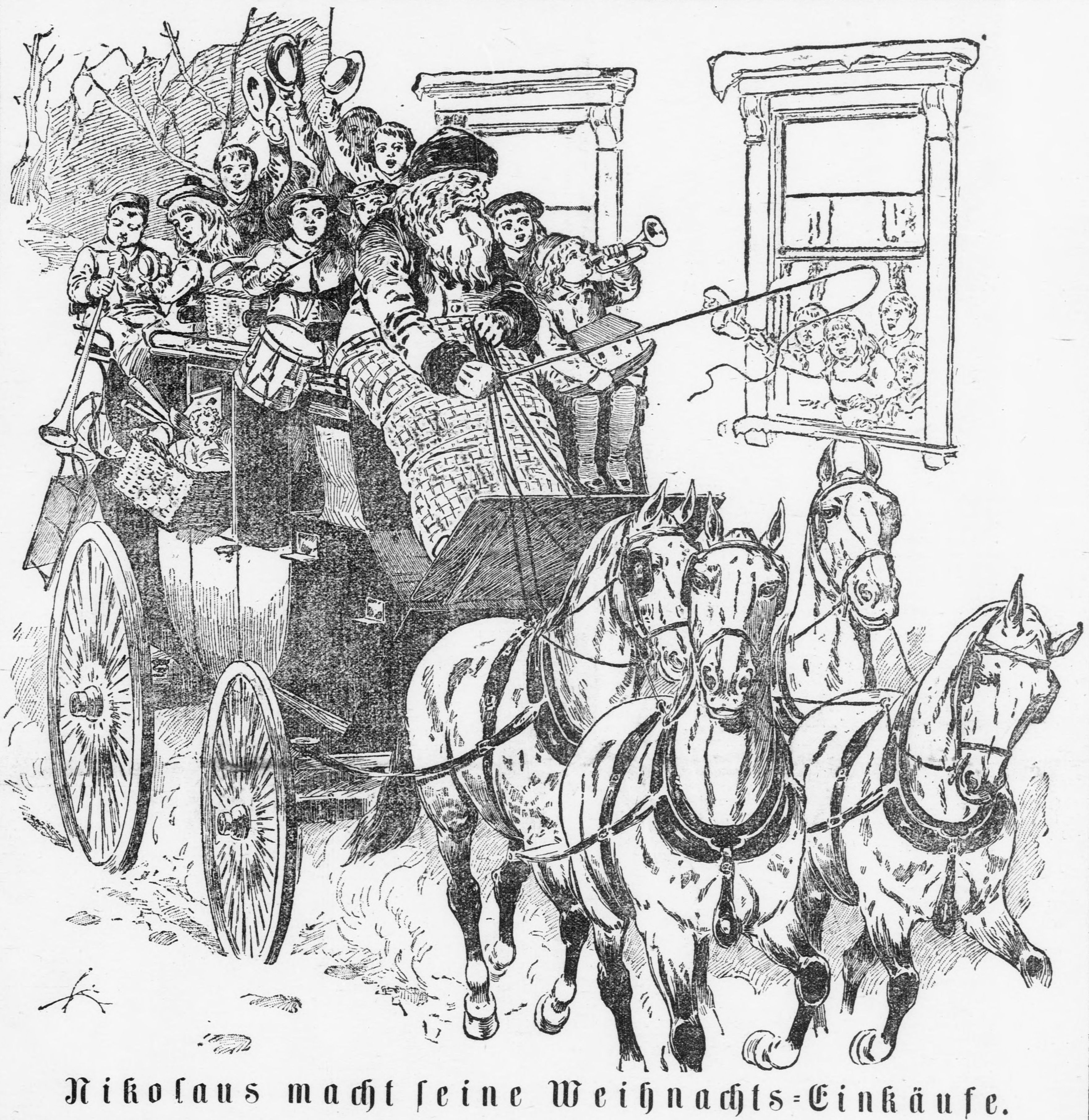 In one image a store advertises its in-store holiday musical performances, decorative displays, ice palace, and post bureau for Santa Claus; in another Santa Claus himself fits a man for an overcoat. 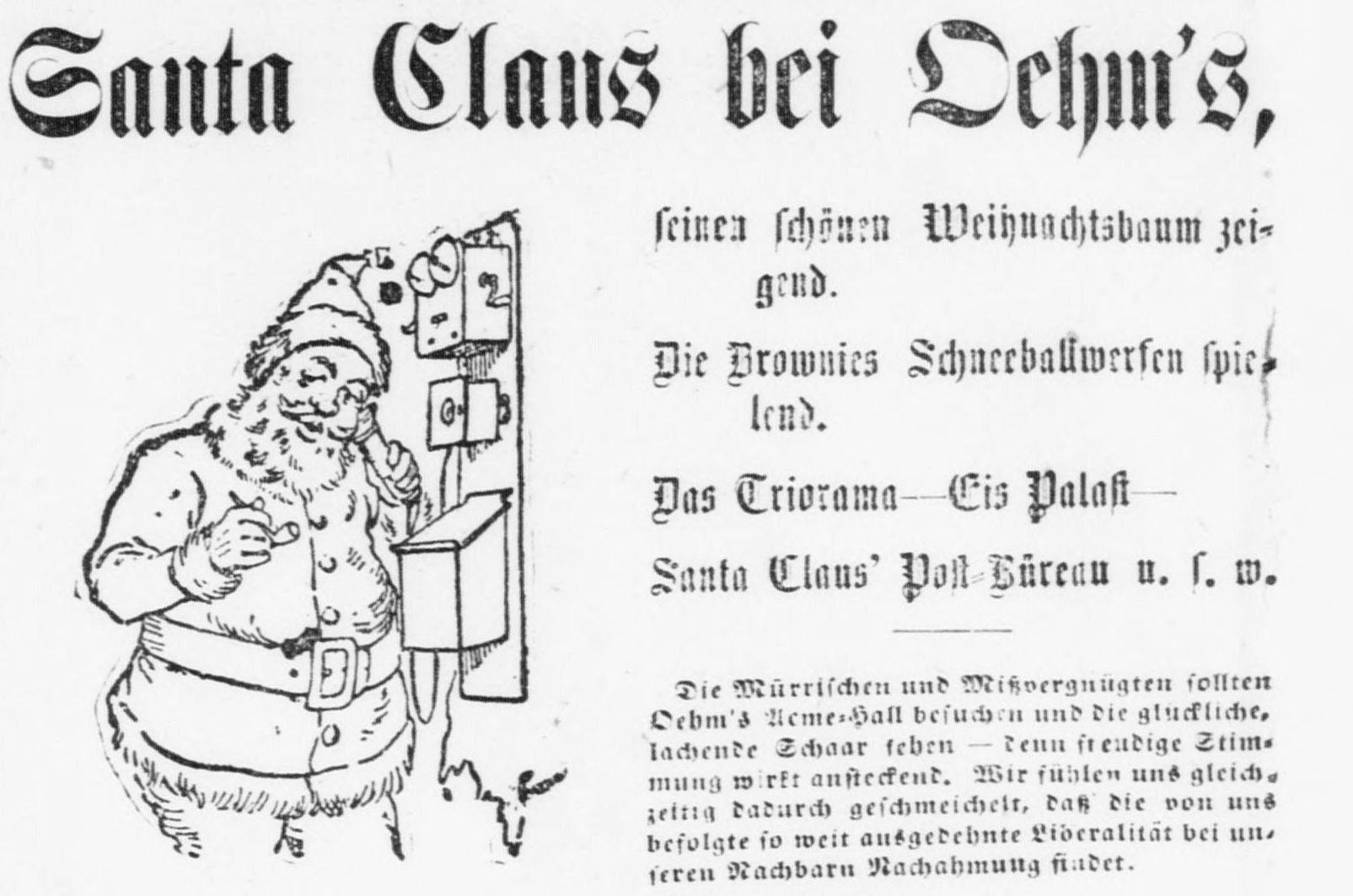 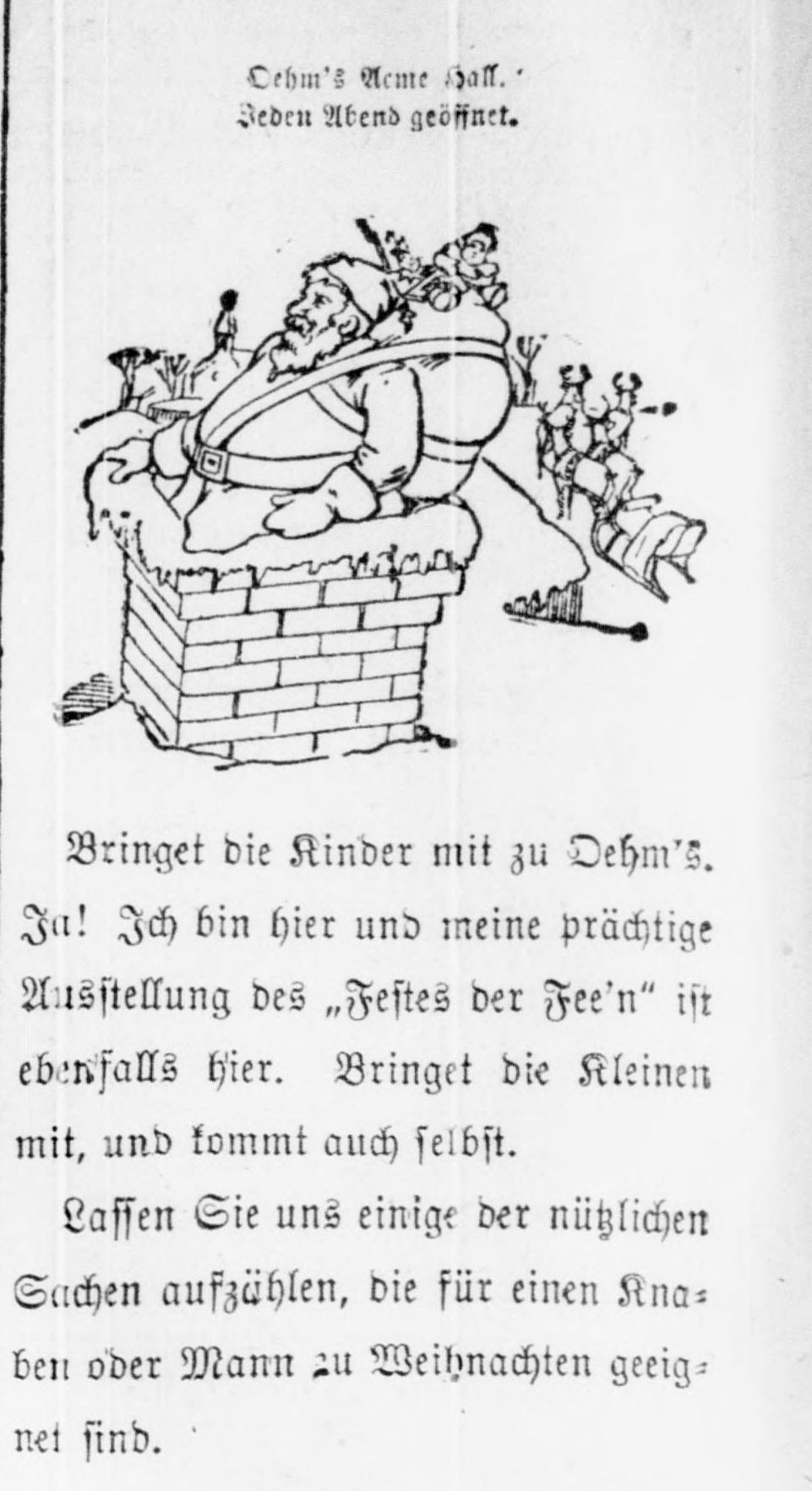 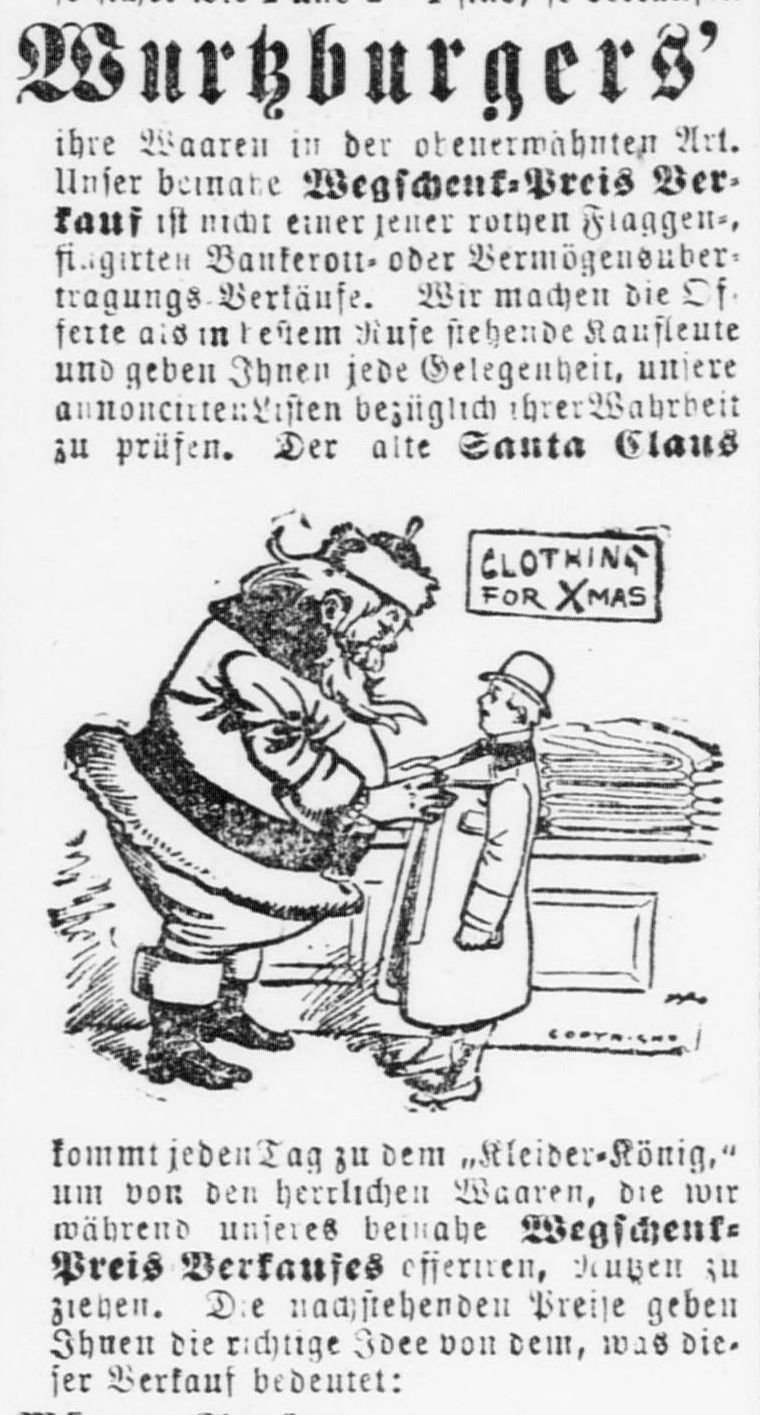 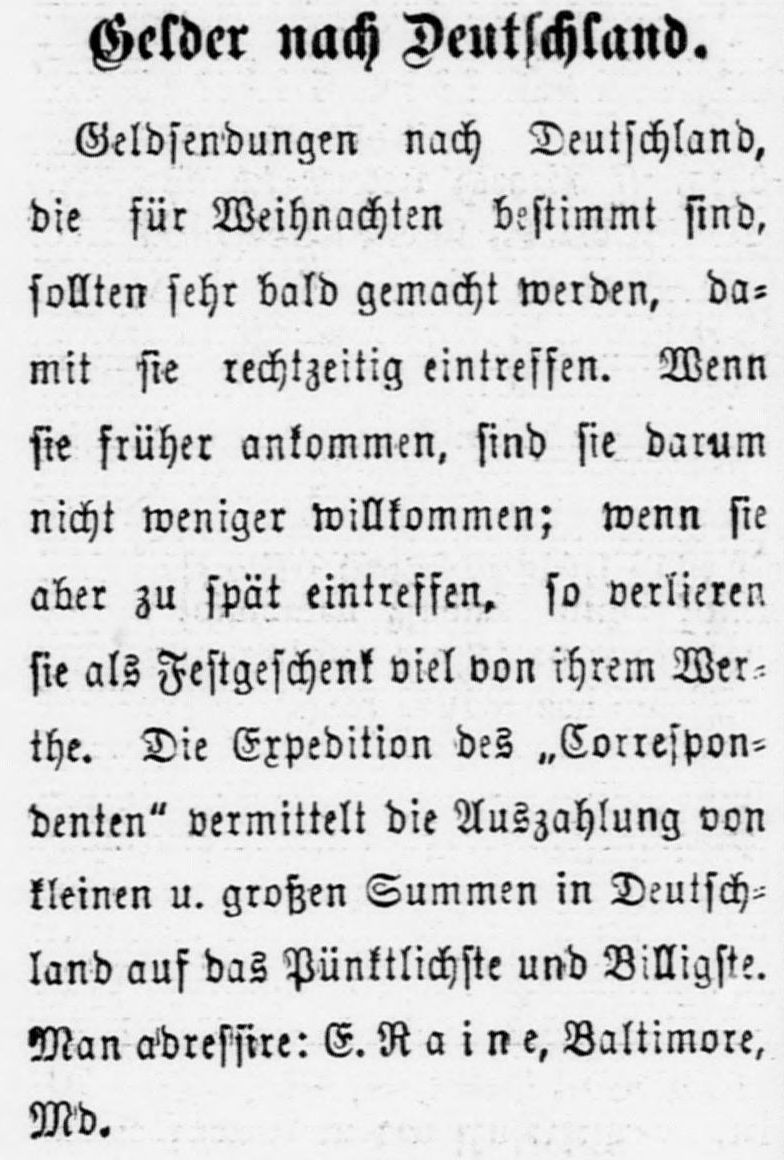 Remittances to Germany that are intended for Christmas should be sent very soon, so that they arrive in good time. If they get there earlier, they aren’t any less welcome, but if they arrive late, they lose a lot of their value as Christmas presents. The forwarding service of the “Correspondent” is the most punctual and cheapest way of getting payments of small and large sums to Germany. Address your request to: E. Raine, Baltimore, MD.

Der Deutsche Correspondent consistently printed a yearly calendar and inserted it into an issue either at the end of the year or very beginning of the year. On one calendar the paper proudly advertises its founding in 1841 and displays the building built by George A. Frederick on the corner of East Baltimore Street and Postoffice Avenue (now Custom House Alley) where the paper was drafted and printed. The building later was burnt down in the 1904 fire that consumed large portions of downtown Baltimore at the time. (Look for a detailed post on the Baltimore fire of 1904 in the months ahead.) 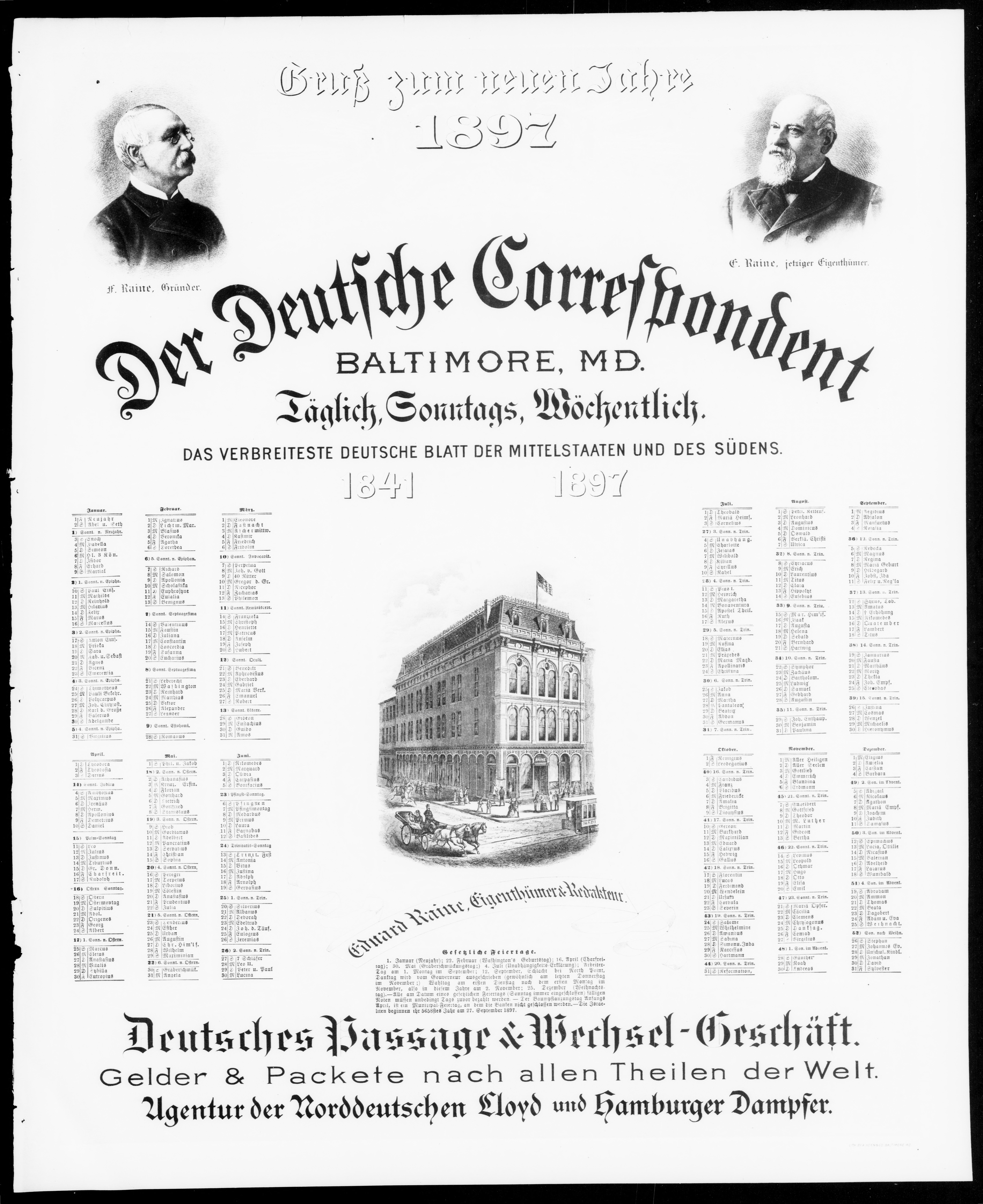 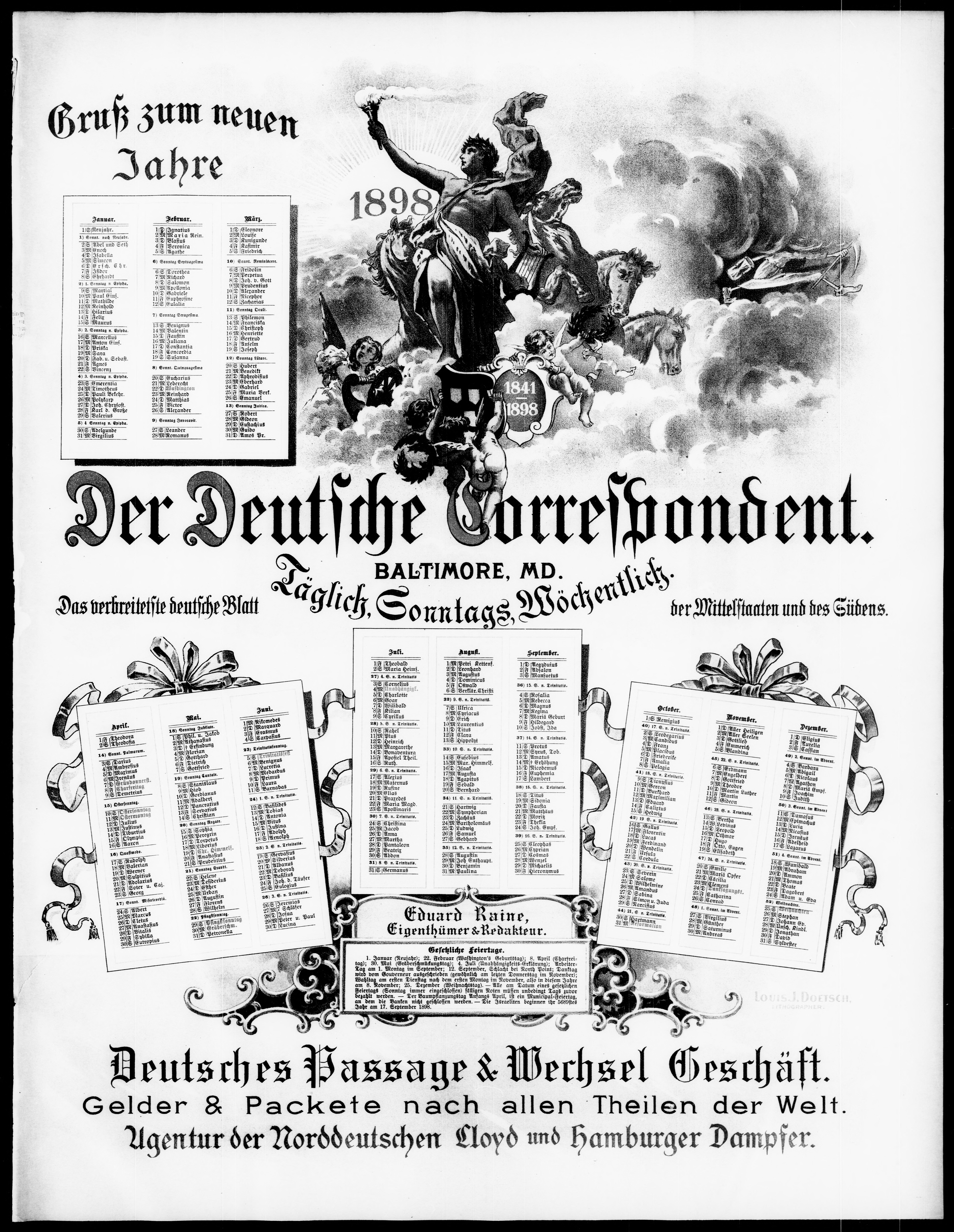 Happy Holidays from the Historic Maryland Newspapers Project! See you in the new year!

Time for a vacation in the #archives!
It’s an #archival correspondence #tbt featuring a purrfect birthday card from 1963!
It’s a rainy day ☔️ in Maryland!