As stated in an earlier blog post, members of the Maryland and Historical Collections unit at the University of Maryland libraries have been creating an inventory of memorabilia within the Spiro T. Agnew papers.  In this blog post, we will be looking at some of the fascinating items in the collection related to space travel.

When Agnew entered office on January 20, 1969 the space race between the United States and the USSR was in full swing.  Just a month prior, the Apollo 8 mission had successfully become the first spacecraft with a human crew to leave the Earth’s orbit.  Six months into office, Agnew would be able to celebrate the first man to walk on the moon with the success of the Apollo 11 mission in July 1969.  The Nixon/Agnew administration would forever be associated with this success and the prevalence of space memorabilia in the collection shows that Vice President Agnew had quite an interest in the subject.

As Vice President of the United States, Agnew had access to a number of unique space memorabilia.  He had signed photographs from crew of the Apollo 7, 8, 9, and 12 missions.  The signed photograph from the Apollo 8 mission is a print copy of the famous photograph called “Earthrise” which astronaut Bill Anders took from lunar orbit.  The Agnew papers includes the commemorative certificate which indicates that Agnew watched the takeoff of Apollo 11 at the Kennedy Space Center in Florida, where he sat next to President Lyndon B. Johnson.  Agnew even received a model of a US space rocket ship. 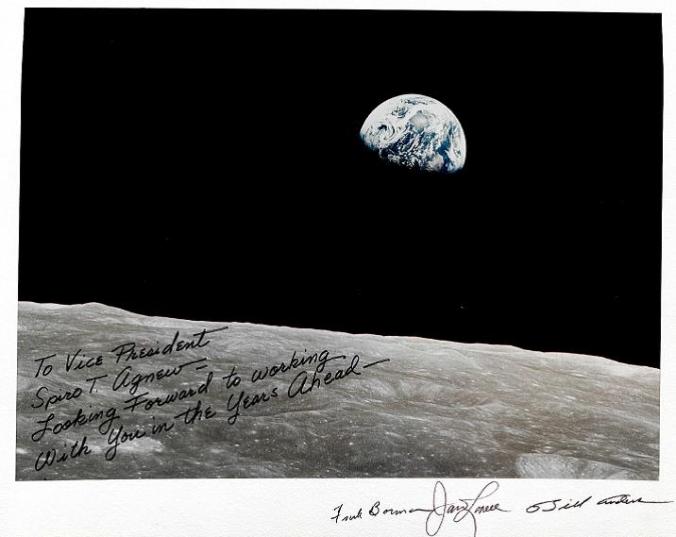 “Earthrise” photograph by Bill Anders, signed by the three members of the Apollo 8 crew.

Agnew’s enjoyment of these accomplishments of space flight must have been well known by his supporters because they sent Agnew a number of items related to space exploration.  One of these items is a commemorative coin and stamp celebrating the Apollo 11 mission, which was sent by the company that manufactured them.  Another gift was a poster that featured the front page of a newspaper from every state on the day that the Apollo 11 mission landed on the moon.  Agnew also received drawings and paintings depicting astronauts on the moon from various citizens. 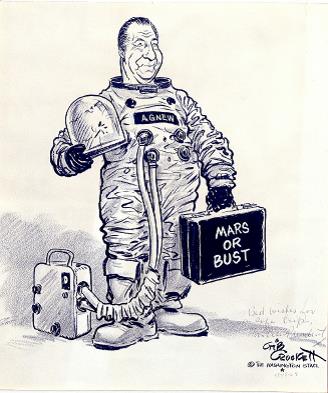 Political Cartoon by Gib Crockett of the Washington Star, 1969.  Gib Crockett’s drawings are protected by copyright.

Agnew’s interest in space was not just a hobby, but became part of his Vice Presidential duties.  In February 1969, Nixon created a Space Task Group to create an outline of a post-Apollo spaceflight strategy, with Agnew chairing the group.  This group drew up some rather ambitious plans, such as the establishment of a near-Earth space station, further explorations of the lunar surface, and a manned landing on Mars by 1986.  Not all of these plans came to fruition, mainly due to monetary concerns.  However, the group was partly responsible for the creation of the shuttle program which began on January 5, 1972 (1).  Some files relate to Agnew’s time on this group, including a press release on the report of the Space Task Group from September 17, 1969, and a transcript of a speech he gave to invited contributors to the Space Task Group from July 17, 1969.  Agnew was also head of the National Aeronautics and Space Council, for which the Agnew papers also provides an access point.

The reactions to Agnew’s rather wild Mars plans can be seen by two political cartoons that were sent to the Vice President.  In one, Agnew can be seen wearing a space suit and holding a briefcase which reads “Mars or Bust.”  The cartoon was drawn by Gib Crockett from the Washington Star, a newspaper in Washington D.C..  The other cartoon shows a Mars populated with aliens whose faces look like Agnew and at the bottom the cartoon reads “Our Earth Contact, Spiro, is pushing for a landing here by 1986.”  This cartoon was drawn by Pat Oliphant while he was at the Denver Post.

Political Cartoon captioned “Our Earth Contact, Spiro, is Pushing for a Landing Here by 1986” by Pat Oliphant of the Denver Post, 1969.  Pat Oliphant’s drawings are protected by copyright.

The items discussed here represent just a small portion of the hundreds of linear feet of materials in the Spiro T. Agnew papers.  Interested researchers may visit the Maryland Room in Hornbake Library to view the memorabilia collection in person, and a preliminary inventory of the Agnew memorabilia is available upon request.  Please be sure to contact the Maryland Room at least 3 days in advance of your visit so that we can accommodate memorabilia requests in a timely manner.  If you want to learn more about the Spiro T. Agnew papers, please consult the finding aid for the collection.

“Since 1979, when the Gay and Lesbian Labor Alliance was formed, Nancy Wohlforth has been working to bring gay issues into the labor movement. Now the organization is called Pride At Work and is a full-fledged constituency group in the AFL-CIO. National cochair Wohlforth and the newly hired executive director, Kipukai Kuali’i, will fight for domestic-partner pension benefits, greater employment protection, and transgender inclusion. They also want gays and lesbians to understand the power and benefit of unions. ‘Frankly, a lot of people still see the union as a bunch of old white boys who want nothing to do with their interests,’ Wohlforth says, ‘clearly that’s not the case.’

-The Advocate on Nancy Wohlforth in the Best and Brightest Activists collection, August 17, 1999. END_OF_DOCUMENT_TOKEN_TO_BE_REPLACED

In honor of Pride Month, we are featuring items from the Labor Collections at Special Collections and University Archives that highlight the role of the LGBTQ+ community in the labor movement. This particular item will be on display in the upcoming exhibit, “For Liberty, Justice, and Equality: Unions Making History in America” opening October 2017.  LGBTQ+ people of all types are involved in every aspect of labor, although labor unions ignored or excluded them until recent decades. The Pride at Work poster calls attention to the role the diverse LGBTQ+ community played in American history and American labor history and demonstrates a reversal of labor union policy towards LGBTQ+ people.

END_OF_DOCUMENT_TOKEN_TO_BE_REPLACED

In celebration of Women’s History Month, two new exhibitions are available for viewing in the Maryland Room in Hornbake Library related to the history of women’s suffrage in the local area.

The Washington Home of the Philippine Suffrage Movement exhibit is presented in collaboration with Philippines on the Potomac (POPDC) and with the Rita M. Cacas Filipino Community Archives at the UMD Libraries.  The exhibit tells the stories of several extraordinary Philippine women who would go on to change Philippine history and rewrite the nation’s suffrage law. The exhibit features extensive research in local, national, and international libraries and research institutions.  In addition, original materials are on display relating to the Filipina suffragist, writer, teacher, and feminist Sofia de Veyra who lived in the United States between 1917 and 1925.

Titchie Carandang-Tiongson and Ewrin Tiongson, the creators of the exhibit, also recently presented their research process and methodology to English Professor Jess Enoch’s undergraduate class ENGL379Z/WMST 498V Special Topics in Literature; Women and Memory in Material and Digital Worlds.  The students in the class viewed the exhibit, asked great questions after the presentation, and were able to see how this research process related to their own work at recovering women’s suffrage history in the class.

Materials related to Filipino American history and culture in the UMD Libraies can be found in the Rita M. Cacas Community Archives is available for research consultation in the Maryland Room of Hornbake Library.  Numerous images in this community archives collection are also available for viewing in the UMD Libraries Digital Collections.  For those interested in pursuing additional research there is also a research guide on Philippine and Filipino American History and Culture available.

A second mini-exhibit on Women’s Suffrage in Maryland is also on display in the Maryland Room. This exhibit showcases materials from Special Collections related to the woman’s suffrage movement and the Equal Rights Amendment (ERA) during the twentieth century.  Items of interest include a letter signed by Edith Houghton Hooker, noted suffrage leader and editor of the Maryland Suffrage News; a letter from a member of the Maryland Association Opposed to Woman Suffrage; and a sash worn for a 1978 march in support of the ERA.  The materials featured come from a variety of special collections including the League of Women Voters of Maryland archives, the National Organization for Women Maryland Chapter archives, and the Marylandia collection.

The Washington Home of the Philippine Suffrage Movement will be on display through April 29th, 2017.  (Exception: the exhibit will be traveling between April 7th and April 16th and unavailable for viewing at that time.)

The Women’s Suffrage in Maryland exhibit will be on display through the end of March.

Be sure to check the Maryland Room hours before planning your visit!

Think the current presidential election campaign has been unusual?  The new exhibit in the Maryland Room of Hornbake Library explores some of the strange techniques that presidential candidates have used to appeal to voters across much of American history. Candidates (or their spokespeople) have spread serious ideas and spurious notions; built interest from specific demographics of people; sought the support of parties and coalitions of parties; and deployed advertising to increase public visibility and name recognition.

The documents and artifacts in this exhibit date from the 1830s to the 1980s, and are drawn from a variety of collections available for research in the Maryland Room. These include the Spiro T. Agnew papers, the James Bruce papers, the Joseph Tydings papers, the archives of the National Organization for Women (Maryland Chapter), the Rare Books collection, and the Marylandia collection.

Items of particular interest, perhaps, are the autograph letter signed by Senator John F. Kennedy after his nomination by the Democratic Party in 1960, and two official White House photographs, which separately depict Vice President Spiro T. Agnew and President Ronald Reagan. But, then again, there’s the 1932 poster for Franklin D. Roosevelt which promoted “Beer Instead of Taxes.”

Visit these and more in the Maryland Room through the end of October.

🎉 Congrats to our #GetOuttheVoteUMD exhibit team on their amazing virtual tour this afternoon at the Mid-Atlantic Regional Archives Conference!
Spring is here and so are the #rarebook insects!
For #manuscriptmonday, we’re sharing handwritten bookseller notes from the #rarebook stacks!