In June 2016, Merilyn B. Reeves donated a collection of personal papers and publications to the University of Maryland’s Special Collections.  Reeves was a prominent member of the environmental movement in Maryland through her involvement in the League of Women Voters. She was Vice President of the League of Women Voters of Maryland and a member of the national board, where she was in charge of the Natural Resources Portfolio. Additionally, she was President of the American? Lung Association of Maryland and on the national-level board of the American Lung Association.  She tackled environmental issues such as the clean-up of the Chesapeake Bay and the Patuxent River and the defense of the Clean Air and Safe Water Acts before Congress, where she testified on several occasions. More locally, Reeves was a member of the West Laurel Civic Association and she acted as a tour guide for the Piscataway Wastewater Treatment and Patuxent River Water Filtration plants.

Merilyn B. Reeves asking a question to Secretary of State Cyrus Vance at the League of Women Voters National Convention, May 1978

The Merilyn B. Reeves papers contain manuscripts, books, photographs, and videotapes, related mainly to Reeves’ work as an activist.  Beyond some incoming correspondence, the papers consist of testimonies, reports, publications, articles, letters, political cartoons, certificates, and pamphlets. Reeves’s autobiography can be found within the papers. There are thirty-six photographs in the collection which range from Reeves giving tours at a sewage site to autographed photographs with politicians. The VHS tapes include a video about the Chesapeake Bay, a board meeting for the Hanford Advisory Board, and C-Span coverage of a meeting about the Hanford Nuclear site.

In February 2018, as graduate student assistant with the State of Maryland and Historical Manuscripts department of UMD’s Special Collections, I started processing, arranging, and describing the Merilyn B. Reeves papers in order to create a finding aid for the collection.  Soon after the Reeves papers arrived at Hornbake Library, the papers had been rehoused in acid-free boxes and a preliminary inventory of the folder titles was created. I started to more fully process the collection by going through all of the folders and rehousing the papers into acid-free folders.  While I was rehousing the papers, I renamed many of the folders and took notes about recommendations about which folders might need separation. For example, one folder contained political cartoons, papers about Reeves’s term on the League of Women Voters board member, and papers about Reeves’ participation in the Friends of Yamhill County, an organization of concerned citizens in Oregon.  When arranging a collection, archivists typically try to adhere to respect des fonds, or maintain original order.  However, in cases such as that particular folder, it made more sense to separate the contents of the folder into three separate folders. This decision was dictated in part because the original folder was an accordion folder, making it impossible to fit all of the papers into one standard folder.  For the most part, I was able to keep papers together as they had been originally been arranged, and where changes were made, I documented those alterations. The other major part of this step involved renaming folders with more descriptive titles which more accurately reflected the contents of each folder.

After I finished rehousing the papers, I created my first version of the arrangement of the folders.  I first decided to separate the papers into four series: Autobiography and Biography, Correspondence, Activism, and Audiovisual Materials.  Within those series, I arranged Correspondence and Audiovisual materials chronologically, while the Biographical series was arranged alphabetically.  It was the folders concerning Reeves involvement with Activism – which I retitled Subject Files: Citizen Action on Environmental Issues – that were the most difficult to determine how to arrange. 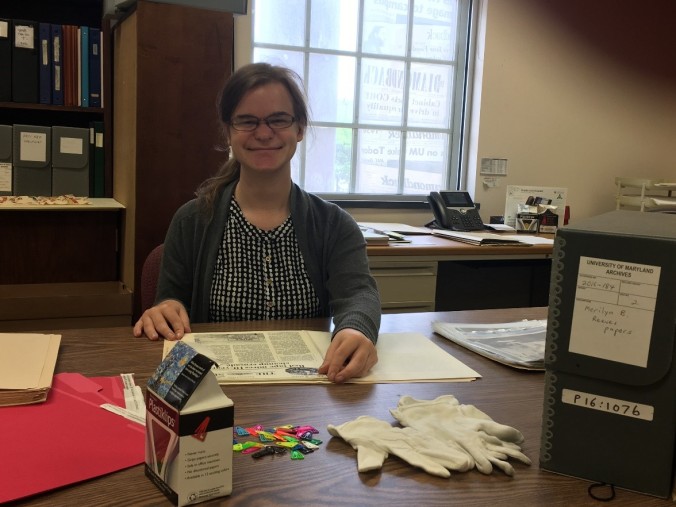 Preservation concerns also informed decisions throughout the processing of the Reeves papers.  Following standard procedure, I removed all metal paper clips and replaced them with plastic clips.  For letters, I removed letters from envelopes and flattened them. The envelopes were then rattached to the letters by plastic clips.  Newspaper clippings were separated from regular papers due to their acidic nature. If there were photocopies available of a newspaper clipping, the original was discarded.  Otherwise, sheets of acid-free paper were placed in front and behind of the newspaper clippings, which ought to keep their acidic elements from leaching onto other papers. Due to the relatively small number of photographs, the curators decided that I should separate the photographs from the subject files and put them into the audiovisual series.  I placed the photographs into individual polyester sleeves to protect them. Perhaps most importantly, I described each group of related photographs with fairly fine-grained descriptions, including names of people and geographic locations who are represented in the photographs.

I have learned so much about the processing experience through working with the Reeves papers.  It has taught me that sometimes the simplest arrangement is the best one. I went through three different arrangements trying to categorize every folder before I realized that the categories were unnecessary and made the arrangement more complicated than it needed to be.  I also learnt that you should arrange and describe based on your intended audience. One of the first steps in the processing process was to identify what classes I thought could use this collection if they came to the archive for research. Thinking about this helped me to determine how to name the folders so that users could most easily locate information and have the information appear during keyword searches.  I will take all that I have learned about the processing process with me as I move into the professional field where I will hopefully be creating more finding aids.

The finding aid for the Merilyn B. Reeves Papers (http://hdl.handle.net/1903.1/36188) will soon be available through the University of Maryland’s new site for finding aids.  Researchers interested in accessing the collection should contact the Curator of Historical Manuscripts (enovara@umd.edu) before visiting the Maryland Room in Hornbake Library.

Nancy Harrison Gage is a graduating MLIS student in the College of Information Studies at the University of Maryland.  She works in the State of Maryland and Historical Collections at UMD’s Special Collections and University Archives. During her time with the State of Maryland and Historical Manuscripts’ department, she has worked on a number of major processing, reference, photoduplication, and outreach projects, including the processing of the Baltimore News American photograph series, the accessioning of the Women’s March on Washington collection, and the preparation of a mini-exhibit of Spiro T. Agnew memorabilia showcased in the Maryland Room between January and March 2018.

On this #CTWwednesday, we remember Sesame Street's Bob McGrath, who passed away this week. Here he is teaching four youngsters sign language ❤️
We’re excited to share a new acquisition and beautiful #titlepagetuesday #rarebook featuring the art of English illustrator Arthur Gaskin!
L is for Lecture in the ABCs of author Katherine Anne Porter!