Are you ready to vote on November 8th? Voting is your opportunity to make your voice heard in this year’s presidential election. For the month of November, the Labor Collections staff at University of Maryland are highlighting an organization that encouraged the youth and minority vote: Frontlash.

Visit the temporary exhibit in the Maryland Room for a sampling of the posters and canvassing materials Frontlash used to mobilize and educate the youth and minority vote during presidential election seasons. Perhaps they will inspire you to vote! 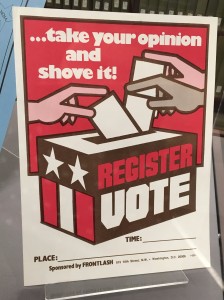 Poster sponsored by Frontlash displayed at a booth or college campus

In 1968, the non-profit organization Frontlash was founded with the mission to help minority groups and young people register to vote. Frontlash stepped up their voter education efforts for young people when the 26th Amendment was passed, in 1971. The 26th Amendment changed the voting age from 21 to 18 years old. At the time, many young voters were not aware of the registration process. Frontlash worked towards promoting voter education by going door-to-door, putting up poster displays, and setting up public stands on sidewalks and college campuses to assist young voters with the registering process.

The American Federation of Labor and Congress of Industrial Organizations (AFL-CIO) became Frontlash’s main financial supporter and Frontlash became more involved in labor causes. Frontlash added labor issues into their youth voter education and helped organize various protests and strikes, such as the “Toycott” protest in 1989. In 1997, Frontlash disbanded, though the AFL-CIO continued Frontlash’s legacy by continuing to educate young voters to register.

Here are some of our favorite items that are on display from the Frontlash Collection! 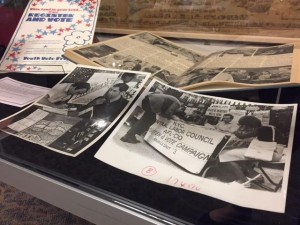 Both of these photographs are examples of the stands that Frontlash and AFL-CIO would sponsor, circa 1970s.

Posters sponsored by Frontlash that would have been displayed on college campuses. The issues that the poster mentions, such as tuition, financial aid, and decriminalization of marijuana, would be cause for concern for students. 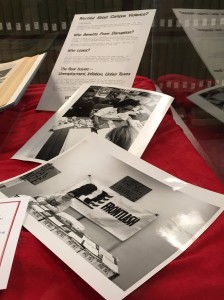 This portion of the exhibit highlights the promotional work that Frontlash did at University of Maryland, as well as at other colleges, such as Michigan University.

The Frontlash collection is one of many invaluable resources within the AFL-CIO archives housed here at the University of Maryland. In 2013, the AFL-CIO gifted the George Meany Memorial AFL-CIO Archive to Special Collections and University Archives, including over 40 million documents and other archival materials. The collection helps researchers understand social movements in the United States, including initiatives encouraging citizens to vote. For more labor history studies, refer to the Labor History Subject Guide.

In the spirit of Frontlash, don’t forget to vote on November 8th!

Erin Berry is a first year MLIS student in the College of Information Studies at University of Maryland. She is a Graduate Assistant for the Labor Collections at the University’s Special Collections and University Archives.

Jen Wachtel is a Graduate Assistant for the Labor Collections program at Special Collections and University Archives pursuing an M.A. in History (Modern Europe), a Master of of Library and Information Science, and a graduate certificate in Museum Scholarship and Material Culture. She expects to graduate from the University of Maryland in December 2018 to pursue a career in museum archives.

🎉 Congrats to our #GetOuttheVoteUMD exhibit team on their amazing virtual tour this afternoon at the Mid-Atlantic Regional Archives Conference!
Spring is here and so are the #rarebook insects!
For #manuscriptmonday, we’re sharing handwritten bookseller notes from the #rarebook stacks!