Hornbake Library is excited to announce a three-part film series- Alice Goes to the Movies. Don’t miss this rare opportunity to see early Alice films and learn about how they were saved from the passage of time. David H. Schaefer, longtime Lewis Carroll collector and Alice film expert, will be sharing some of the highlights of his Alice film collection and discussing the process of restoring and digitizing them.

Join us on April 21st from 4:30-6:00pm in Hornbake Library, Room 0302H for our second film night. Dr. Schaffer will be opening the film series with a brief introduction on the role of “non-theatrical” motion pictures in contributing to the popularity of the Alice stories.  Afterward, munch on popcorn as we watch the 1915 silent film Alice in Wonderland, directed by W.W. Young. The sequence from the 1930 classic Putin’ on the Ritz,  featuring Joan Bennett dancing through Wonderland, will also be shown. 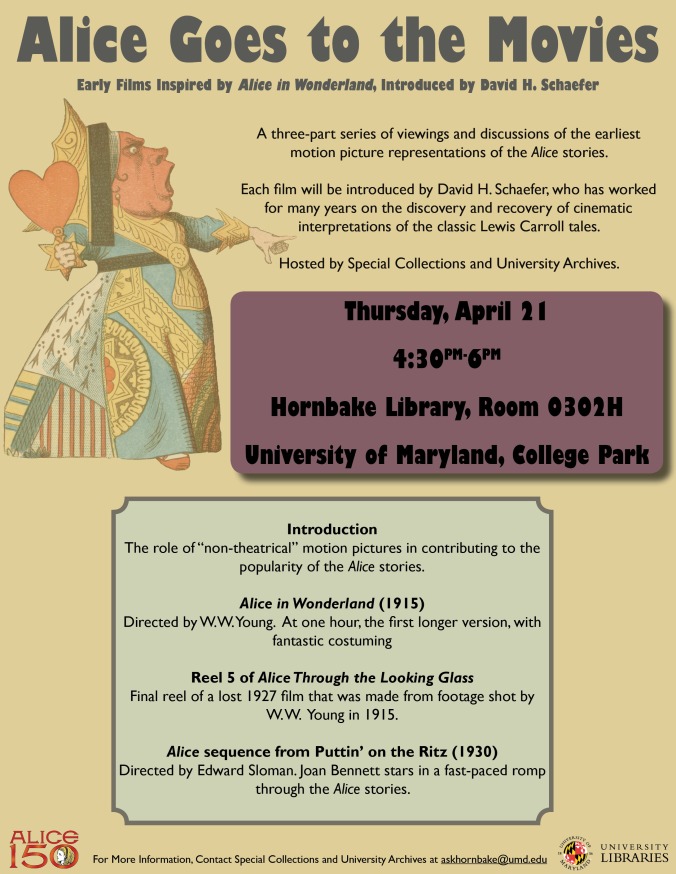 All are welcome – unless you are the Queen of Hearts! Whether you are interested in learning about film preservation or are one of many Alice fans, you are certain to enjoy a one-of-a-kind adventure in Wonderland. Directions and parking information can be found online.

Don’t forget to visit our Alice 150 Years and Counting: Legacy of Lewis Carroll exhibit, currently on display in Hornbake Library, to explore all things Alice.

If you are a film/theater/music fan, don’t miss the exhibit Alice in the Performing Arts, now on display in the Lowens Reading Room at the Peforming Arts Library. This companion exhibit features unique Alice film items, like this book of previously unpublished Walt Disney illustrations.

Visit our online exhibit and take a look at some of the illustrations inside this and other Alice items on display!