In Commemoration
of the AFL-CIO’s 60th Anniversary

Before 1955, the AFL (American Federation of Labor) and the CIO (Congress of Industrial Organizations) were separate, competing organizations.

The two organizations chose to merge in 1955 to strengthen the labor movement and help eliminate competition between unions and workers.

This is a “behind the scenes” look at the logistics involved in working out the details of the merger among members of the AFL-CIO Unity Subcommittee and the earliest attempts at unity with the No-Raiding Agreement. See Meany’s notes on the constitution draft, handwritten minutes from the Unity Subcommittee about early plans for merging departmental staff, and correspondence between Meany and Reuther about the progress of the merger.

Listen to clips from AFL-CIO’s merger convention, held on December 5, 1955: 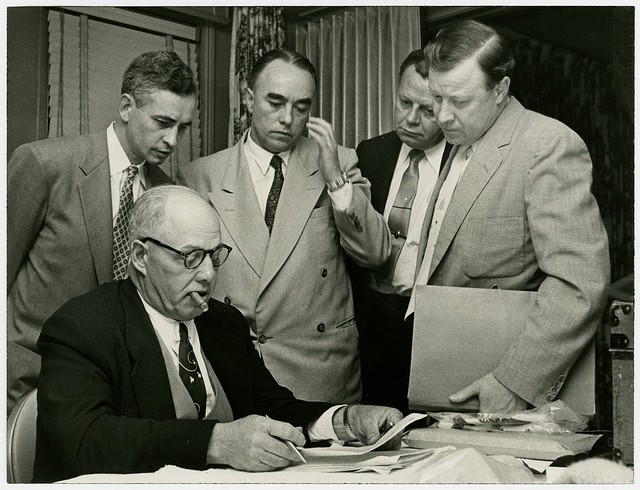 Selected documents, photos, and artifacts from the AFL-CIO Archive are on display in Hornbake Library, University of Maryland until Friday, March 4, 2016.

To learn more about what’s in the AFL-CIO Archive go online to go.umd.edu/laborarchives

E-mail us for more info at askhornbake@umd.edu

The @aflcio #civilrights Department records include so many important and interesting materials. It was difficult to only select 22% of these records to #digitize Take a look at this #discrimination case file from a Texas worker who was fired in 1968.
🐌 Happy #marbledmonday!
20 16mm film reels will be digitized as part of the CLIR grant we received to #digitize a selection of the AFL-CIO Civil Rights Dept records. This is just a small fraction of the unique labor films we have at #UMDLabor Here’s a behind the scenes look at our film stacks.