Have you ever listened to someone talk endlessly on a boring topic, only to have them storm off when they caught you daydreaming? Then you have an idea of what was in store for Alice when she encountered the Mouse in Lewis Carroll’s Alice’s Adventures in Wonderland.

The Mouse is the first character Alice speaks to in Wonderland. After crying a pool of tears (thanks to her enourmous height) , she suddenly finds herself shrunk down, wishing she hadn’t cried so much. To her amusement, she finds the Mouse splashing about nearby and desperately tries to get its attention. She reasons it must be a French mouse, finally callling out “Ou est ma chatte?” [Where is my Cat?], the only French phrase she remembers. Startled and offended, the agitated Mouse informs Alice of its family’s hatred of cats, ultimately swimming away in disgust.

Once on land, the Mouse tries to dry off all the creatures who fell into Alice’s tears with a dry lecture on William the Conqueror. The mouse is repeatedly annoyed by interruptions from the crowd, but resolved to continue his lecture. That is, until the Dodo suggests a more energetic method of drying off- a caucus race, much to the relief of the bored audience.

“Ahem!” said the Mouse with an important air, “are you all ready? This is the driest thing I know. Silence all round, if you please! “William the Conqueror, whose cause was favoured by the pope, was soon submitted to by the English, who wanted leaders, and had been of late much accustomed to usurpation and conquest. Edwin and Morcar, the earls of Mercia and Northumbria–“”

Perhaps you should think of Carroll’s clever (and long-winded) Mouse the next time you are sitting in a lecture hall on a rainy day!

Visit the Maryland Room gallery in Hornbake Library from October 2105-July 2016 to explore the Mouse and the rest of the Wonderland cast of characters in the exhibit Alice 150 Years and County…The Legacy of Lewis Carroll: Selections from the Collection of August and Clare Imholtz. 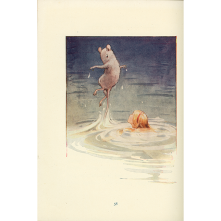 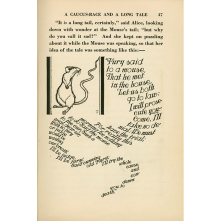