Today’s post is written by Elliott Wrenn, Student Assistant for the Historic Maryland Newspapers Project and MLS candidate in UMD’s College of Information Studies. Many thanks go to Jill Fosse for translating the Humoristisches captions from the original German to English.

In the spirit of Valentine’s Day, we at the Historic Maryland Newspapers Project decided to ask: how did Baltimoreans a century ago write and joke about romance? So we peeked into the cartoon section of Der Deutsche Correspondent, a German-language paper published in Baltimore from 1848-1918. 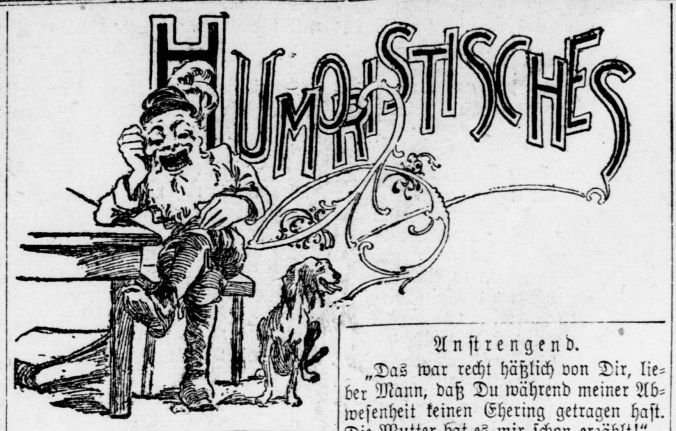 The section clearly is meant for the adult persuasion in Charm City. The artist(s) enjoyed poking fun at society’s titled individuals who had fallen on harder financial times: a Baron marries at the behest of his creditors and a woman mocks a suitor’s testimony that he “cannot live without her.” Indeed! She responds her father is curious how the suitor can live without her too. 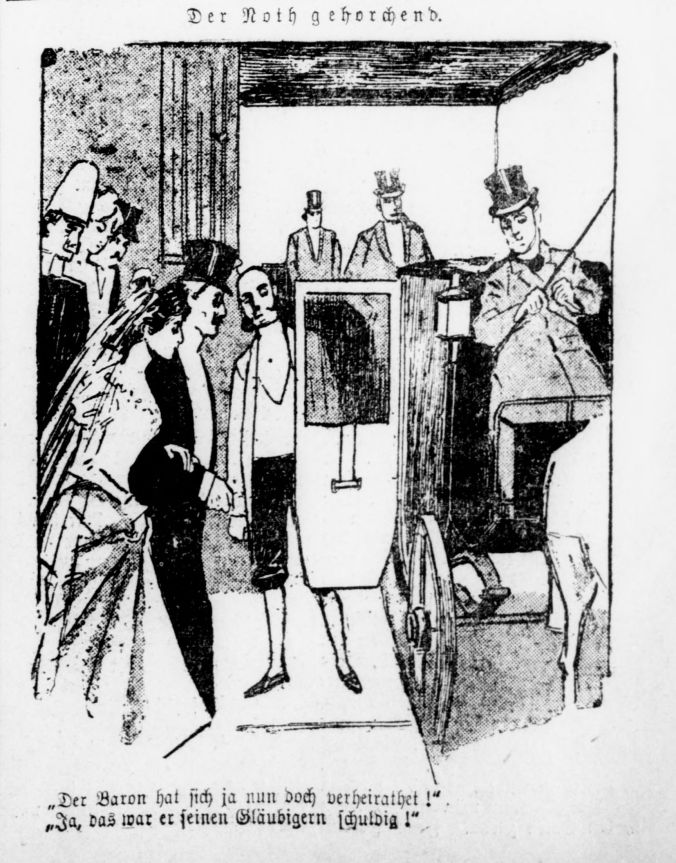 “So the Baron got married after all!”

“Yes, he was due his creditors.”

“I can’t live without you, Siddy. May I speak with your Mama?”

“Oh, go straight to Papa, he’s been waiting for you a long time.”

“Yes, he said just recently: ‘I’m really curious how long the Lieutenant—judging by his debts—can carry on living without you!'”

Men provide compliments, either honest and self-deprecating or for the purpose of their own advancement. Below a man refers to his better quarter, rather than his better half. Then in the comic strip, the artist makes sure the lieutenant is anything but “flawless.” 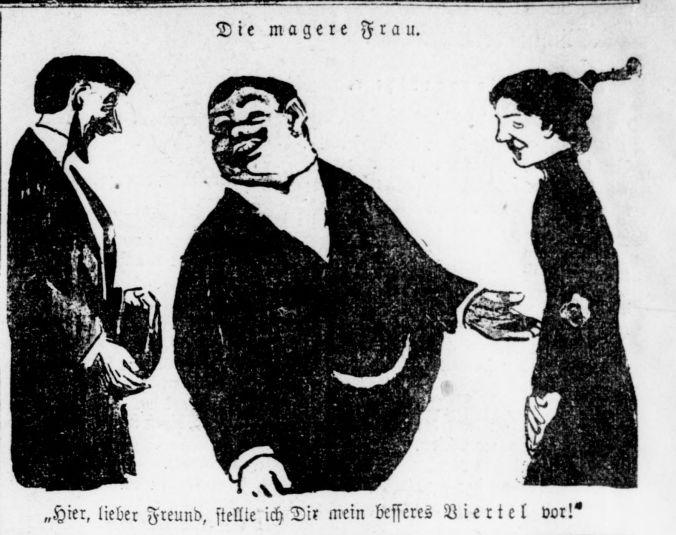 “Here, dear friend, let me introduce you to my better quarter!”

Lieutenant: “Oh there are the daughters of my commandant (or commanding officer) drinking coffee. I must pay them a flawless compliment—”

“My compliments to you, Mesdemoiselles!”

Perhaps a play on Baltimore’s merchant roots, a classy charity event goes awry for a sale of kisses. 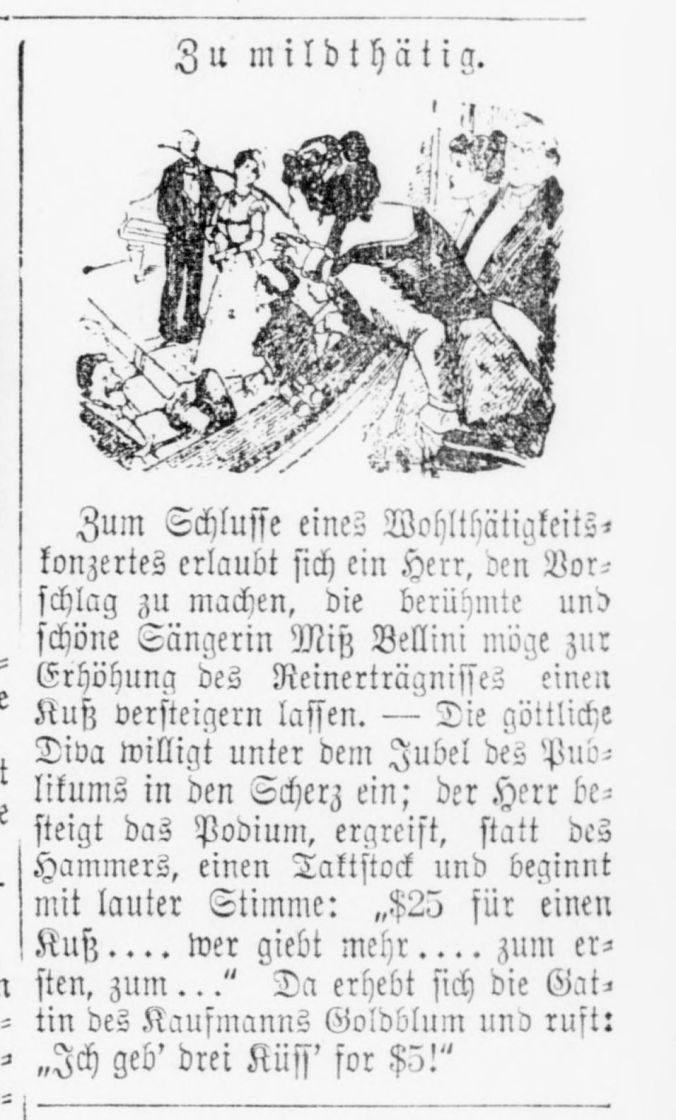 At the end of a charity concert a gentleman ventures to suggest that the famous and beautiful singer, Miss Bellini, might agree to help increase the profits by auctioning a kiss. To the cheers of the audience the heavenly diva agrees to join in the joke. The man steps up to the stage and grabs, instead of a hammer, a baton, and begins in a loud voice, “$25 for a kiss . . . who will give more . . . going once, going . . . ” At that the wife of the merchant Goldblum stands up and shouts, “I’ll give three kisses for $5!”

But perhaps something is universal—”in-laws” always have been depicted as a curse. 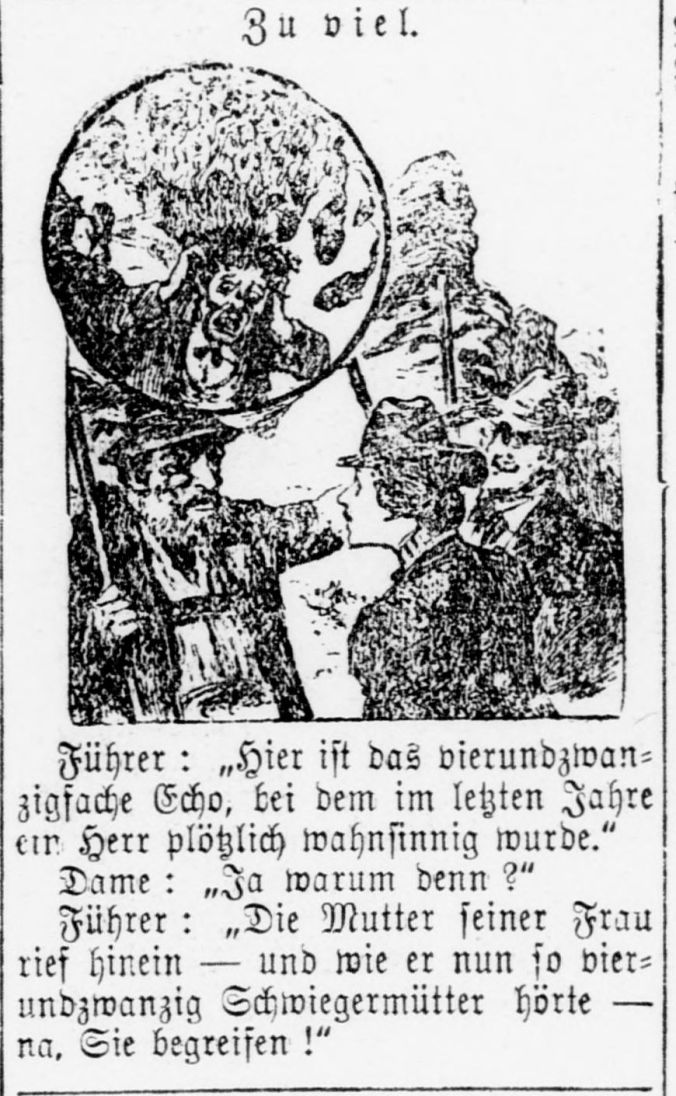 Lady: “How did that happen?”

Guide: “His wife’s mother called into it—and when he heard twenty-four mothers-in-law—well, you understand!”

Try your own Humoristisches skills. Post suggested captions for the cartoon below in the Leave a Reply section. 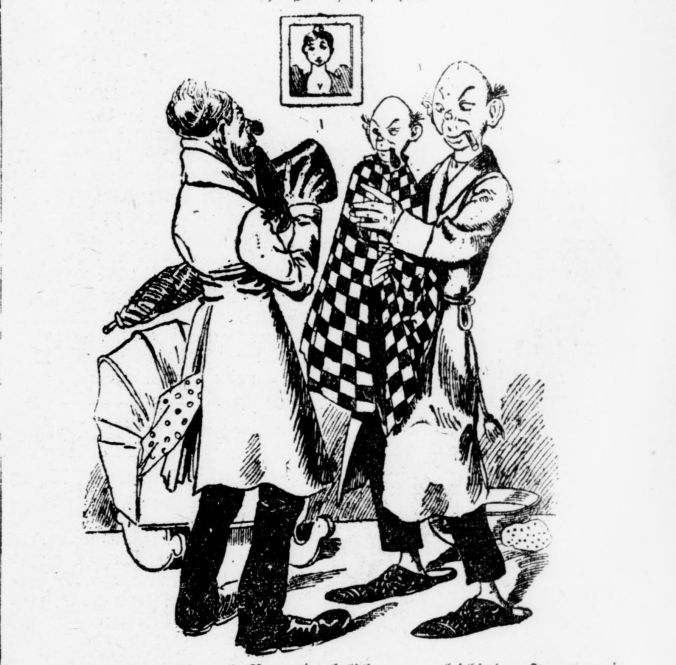 Stop by Hornbake Library to take a look at these beautiful color #woodblock prints of #Japanese scenery from the #rarebooks collections! Can you spot the iconic Mount Fuji? 🗻
Another #rareboook we’re highlighting that entered into public domain in 2023 is Virginia Woolf’s To The Lighthouse
Time for another #familyportraitfriday! 📸