Before I begin discussing more intimate details of some of the materials our project works with, I thought I should take the time to give a brief overview of who we are and what we’re studying. There are four of us who read, decipher, and analyze the pamphlets. Matthew Jones is a student of library science at UMD. He also works on various other projects in Special Collections at UMD. In addition to Matthew, there are three students from the Department of French and Italian. Annie Rehill is a doctoral student in French working on post-colonial and French Canadian literature. Danica Hawkins is a first-year Masters student in French whose interests range from 17th century comedy to Proust. And I am Nathan Dize. I am finishing up my undergraduate career at UMD in English and French and will be joining Annie and Danica in the graduate program at UMD next fall.

Now that you know a bit more about the people on the front lines, it might be useful to know some of the subjects we’re working with. Since the beginning, we’ve been focusing on the pamphlets in three main subject categories: colonial documents, court cases, and education pamphlets. We initially began working on assigned subjects:  Annie working on education, Danica working on court cases, myself working on colonial documents and Matt working on a little bit of everything. However, this has changed more recently and now we are prioritizing the colonial documents and education pamphlets for the time being. Pending any changes, these are the subjects we will be working with throughout the remainder of the spring semester. I think I speak for the group when I say that it doesn’t matter to us which topics we work with because they are all so intriguing and impressive to work with. Saying that, my own personal interest is in the colonial documents where you can see the Haitian revolution unfolding before your very eyes.

One particular document of interest is an address to the Assemblée Nationale on behalf of French landowners in Saint-Domingue for preventative action against a slave rebellion. The address, an attempt to appeal to the Assemblée for immediate action, clearly documents the demographic disparity between slaves and white planters. The planters make the argument that the 10:1 slave to planter ratio is a recipe for disaster, which could lead to a slave revolt. The document peripherally discusses the use of slaves in the colony of Saint-Domingue, noting that the African slaves are physiologically suited to work in the harsh conditions of the Caribbean sugar cane fields. This is a multifaceted document revealing that Saint-Domingue was a ticking time bomb that was ready for a slave revolt, that there was a staunch defense of African slavery amidst the abolitionist movement lead by the Amis des Noirs, and finally that there was such a separation between the French planters and their fellow countrymen in Paris who had little sympathy for their impending troubles. 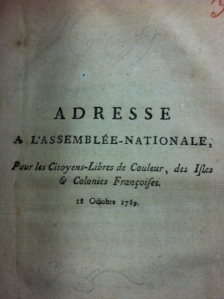 This is the cover page of an Address to the French National Assembly “for the free citizens of color, the islands, and the French colonies.” 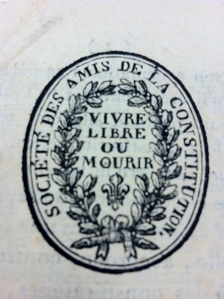 Here is one of the various insignia we’ve found in the documents. This one says “Society of the friends of the constitution: Live free or die.” 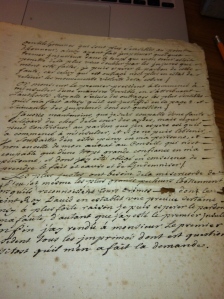 This is one of my favorites. It is an entire page of handwritten script from the 18th century. There was marginalia written throughout the document and this was on the last page.

Thanks for reading our blog and please look forward to our next post coming soon!