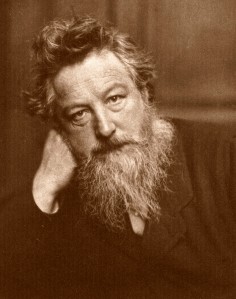 In its December 2012 issue, Wired published an article “Before the Shire”  highlighting William Morris’s influence on the fantasy novel genre, most notably on the works of J.R.R. Tolkien. Morris’s later works, including The House of the Wolfings and all the Kindreds of the Mark, Child Christopher and Goldilind the Fair, The Sundering Flood, and The Well at the World’s End, contain elements of the supernatural, mythical expansive worlds, and tales of epic voyages fraught with heroic battles.  These works are often credited influencing pioneers of modern fantasy literature J.R.R. Tolkien and C.S. Lewis.

Morris’s fantasy novels and historical romances were inspired by his love of all things medieval, as well as his travels through Iceland. Morris was enamored with the landscape of Iceland and Norse mythology.  He began translating Icelandic sagas 1869, expanding to classical and medieval literature shortly thereafter . The combination of history and mythology fueled his passion for these works. His translations include Volsung Saga: The story of the Volsungs and Niblungs with certain songs from the Elder Edda, The Tale of Beowulf, The Odyssey and The Story of Gunnlaug the Worm-tongue and Raven the Skald.

To illustrate Morris’s connection to fanatasy, Wired chose the binding of an 1890 edition of Morris’s The Tale of the House of the Wolfings from our exhibit How We Might Live: The Vision of William Morris. The image invokes legends of kings and battles that have become the hallmark of literature by Tolkien and George R.R. Martin. Read an excerpt from House of the Wolfings to get a taste of Morris’s fantasy prose:

Whiles in the early Winter eve
We pass amid the gathering night
Some homestead that we had to leave
Years past; and see its candles bright
Shine in the room beside the door
Where we were merry years agone
But now must never enter more,
As still the dark road drives us on.
E’en so the world of men may turn
At even of some hurried day
And see the ancient glimmer burn
Across the waste that hath no way;
Then with that faint light in its eyes
A while I bid it linger near
And nurse in wavering memories
The bitter-sweet of days that were.

To learn more about Morris’s translations and fantasy writings, visit the online exhibit How We Might Live: The Vision of William Morris.